Energy Efficiency Ratio, or EER, is a way to exhibit how well an air-conditioner is operating based on the power being used.  Most homeowners are of course familiar with SEER, the ratio across an entire season.  Since SEER is tested at a "partial load", the EER is a more realistic number to use when figuring energy savings.  AHRI tests their EER of residential air-conditioners using 400 CFM per ton of airflow at 95F Outdoors / 80F Indoors and 67F Wet Bulb.  This compared to the SEER testing…

However, it appears that these two companies aren't the only ones trying to get in on the electric car market; it was recently reported that Hyundai Heavy and Magna-E Car Systems have come together under an agreement to develop next-gen lithium ion batteries. Their goals reach far and wide, as Hyundai hopes to have 30% of the electric car market in Europe and North America at some point or another.

With this many car-makers trying to make their way into the electric car industry,…

The Energy Out West conference is held every other year and began in 1996 when a group of people doing weatherization work in the Northwest thought they could help each other do it better. The current president of Energy Out West (EOW) is Mimi Burbage, who should be familiar to readers of Home Energy and anyone in weatherization. Mimi brings that independent, Alaska, straight talk style to whatever she does, from heading the Alaska Housing Finance Corporation to her work for EOW.… 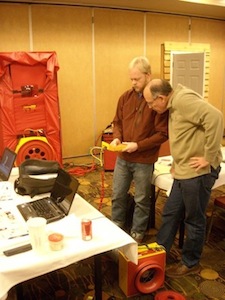 So, you're about to take a class to become a home energy rater or building analyst so you can go out and do energy audits. Maybe you've already taken a class and are out there trying to make a living at it now. You may be aware of this already, but here's a little secret: What you learned in your 5 or 8 day class was just the tip of the iceberg. If you're new at this, you've…

Here are links to my latest posts on how these motors can be used for retrofitting in existing HVAC systems.

HVAC Savings Upgrades – Cutting Fan Watts In Half or More

In this post I cover how the savings can be dramatic, and the most important part is to get duct pressures low.…

This year ACI held its largest ever national home performance conference in Baltimore, Md.  It was the largest in the number of workshop sessions: over 195 sessions, in 25 thematic tracks; with the largest number of exhibitors (115) and sponsors (48).

The three themes stood out: a) keep it simple (from the homeowners perspective); b) there is no silver bullet; and c) HVAC is jumping into home performance, maybe not head first, but at least with both feet in a measured…

Non-condensables in a residential split air-conditioner can be, for most technicians, a pandora's box to diagnose.  Fortunately, there is a simple process that can identify this condition without spending hours and hundreds of dollars in virgin refrigerant.  I think we all are aware that R-22 has hit an all time high, so getting this right is more important than ever - if you want to retain your customer.

There are several ways air and/or water vapor can enter a sealed system. … 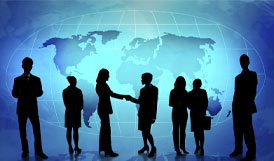 The way we think could be costing us a lot of…

A strong commitment to the development of alternative energy has been made by President Barack Obama. In a recent radio address, the President called for a strategy "that relies less on foreign oil and more on American-made energy". These renewable energy sources, which include solar and wind power, will not only help wean the U.S. from fossil fuels, but create thousands of new American jobs. Solar training of these workers will be an important part in expanding alternative energy…

How To Reduce Energy at Home

How to reduce energy at home has gradually become a household desire as a result of high definition T.V.'s and homes the size of a castle. Throw in a struggling economy and the melt down of a nuclear plant and becoming more energy efficient seems like a great idea.

5 Stats Your Next Client Must Hear

Energy auditors and retrofitters know that it’s hard to sell the benefits of energy efficiency to homeowners. But the truth is that energy efficient upgrades save homeowners money, help sell homes quicker, and yield a higher profit when on the real estate market.

Because it’s not always easy to explain industry ratings and scores to homeowners, auditors need to be armed with statistics to help convey their message. I’ve compiled six statistics that show the importance of energy…

The Rise of Electric Vehicles in the United States

Green Cipherin' - What's Slowing the Mainstreaming of Green Building, and What Homeowners Can Do about It I remember installing some early version residential Energy Recovery Ventilators (ERV) and discovering a potential freezing issue.  Also, if I used only a Heat Recovery Ventilator (HRV) than I would be drying the air during the Winter, and adding significant latent load in the summer.  So, which one do I choose?  The homes are tight enough these days to require mechanical ventilation, and I would much rather a balanced ventilation system that I can control.…

The “Passive House:” Finally a Reality

In years past, the idea of the “passive house” was only a dream. In concept form, the passive house was one that minimized energy losses and operated at maximum energy efficiency. The result would be a home with little to no monthly energy expenses and a fraction of the environmental impact of most homes. Amazingly, the passive house is no longer just a dream; in fact, it’s become a reality. Several companies are able to build passive homes for everyday consumers, creating a huge shift in…

Philips L Prize LED bulb not worth it

The following blog appeared on Mapawatt for the Philips L prize LED bulb cost.   What are your thoughts on the price of this bulb?  Would you recommend it to your customers when there are lower cost LEDs available?

I gathered up my auditing equipment and headed off to a neighboring community to perform a home energy audit that was constructed in 1901. Before I head out of the office and leave the comfort of my desk computer, I look up the home through County Records to determine about what year the home was constructed, about how big the home is, and if records show any remodel years.

While listening to Peter Troast of Energy Circle and Allison Bailes of Energy Vanguard speak in front of a room about social media and Internet marketing for the home performance industry, it's easy for your head to feel like it may explode. In the best possible way, of course.

The Whys and Hows of Light Bulb Recycling

Tired of Blackouts? Get Off The Power Grid!

Greg O'Beirne replied to Greg O'Beirne's discussion building envelope air tightness studies
"Really intersting points being made inthis discussion. Hawaii is on my list of places to visit one…"
yesterday

Kent Browning replied to Greg O'Beirne's discussion building envelope air tightness studies
"Blake - I started to not say anything about 'mild climates like Hawaii'. But I read your…"
yesterday

I haven't used my Watts Up? Pro meter in quite a while, and I'm having trouble pulling data from a…See More
yesterday
1 Comment 0 Likes

Sydney G. Roberts replied to Greg O'Beirne's discussion building envelope air tightness studies
"In response to the chicken-and-egg conundrum, one approach that we used with success in Georgia was…"
Friday